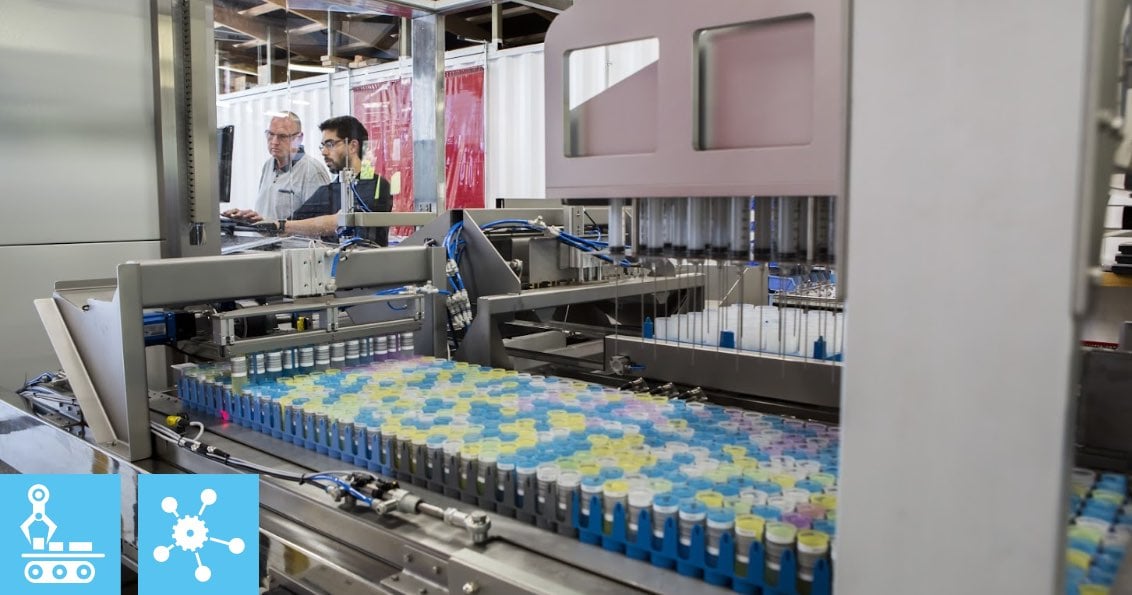 LIC collects individual cow milk samples to test them for productivity (volume from weight), component (fat, protein etc) and animal health (pregnancy, diseases, etc). Samples must be sub-sampled from one container type into another in order to run on dedicated machinery. The samples arrive from the farm in trays of flasks which are capped and individually barcoded.

The previous process was to identify the incoming flask samples by scanning barcodes (or for some herd type, by tray and position) and then proceeding one sample at a time: picking up a flask, shaking the sample to mix it, taking the cap off, scanning the flask, putting the flask onto a scale (connected to a computer), waiting for it to stabilise and take a reading, meantime a vial is taken from a tray, then barcode scanned and placed on the bottom of a funnel. The flask sample is then poured into the funnel with the excess sucked away to waste leaving a small sub-sample in the vial which is then capped and placed into a barcoded tray in a particular position.

The solution came in the form of two machines that became paired together but could work independently in case of a breakdown. The first machine, called the Mapper Weigher did what the name suggests: it creates a digital map of the tray samples with their weights. This works by accepting trays of flasks that enter a lifting system which raises a row of flasks out of the tray for barcode reading and weighing. This weight data is combined with tray position and barcode to produce a map of the samples in the tray. The weighing of the flasks in a vibrating environment requires heavy filtering and isolation which has been implemented in order to obtain an accuracy of +/-0.19 grams for 95% of samples.

The second machine, called the Sub-Sampling Robot (SSR), came later after a period of prototyping. The main purpose of this machine is to sub-sample a homogeneous volume of milk from flask to a smaller container called a vial while tracking barcodes of containers to match data. There are many processes occurring simultaneously in order to perform this task, as well as automatically detecting errors in the equipment. The processes covered by the SSR include:

Some of the technologies used in the machine include: machine vision for determining flask and vial volumes as well as barcode reading of 12 vials at a time, in-process cleaning of the syringes and needles by inserting into a hot water bath with bespoke jetting of water and air to blast away milk solids. The system uses Beckhoff automation hardware which allows for a real-time, deterministic fieldbus to control motors, input and outputs.

The repeatability of this automation has given the customer, and farmers, greater confidence in their herd testing results. There are five of these systems now in service between LIC’s two laboratories in Hamilton and Christchurch, New Zealand.

SSR: Three months of prototyping, followed by 9 months for the design and build for the first production machine.

With over 10 years in automation, Paul Gravatt started with Motion Design as a Design Engineer before moving into the Engineering Manager role. Paul is responsible for leading his manufacturing team through product development, design and build projects, and R&D. Paul holds a BE(Mech) with First Class Honours. 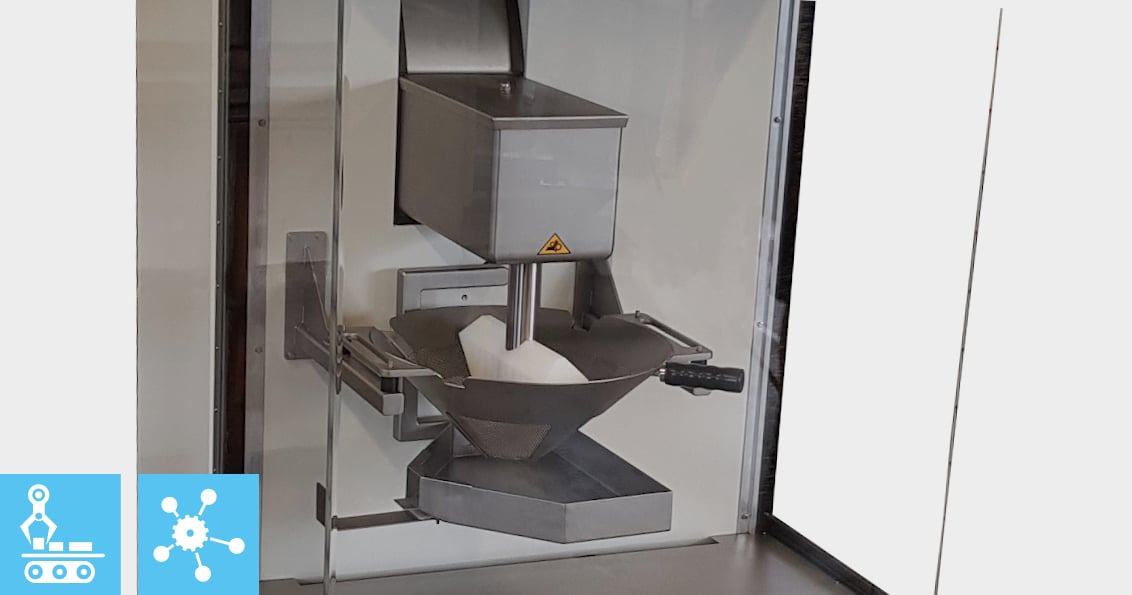 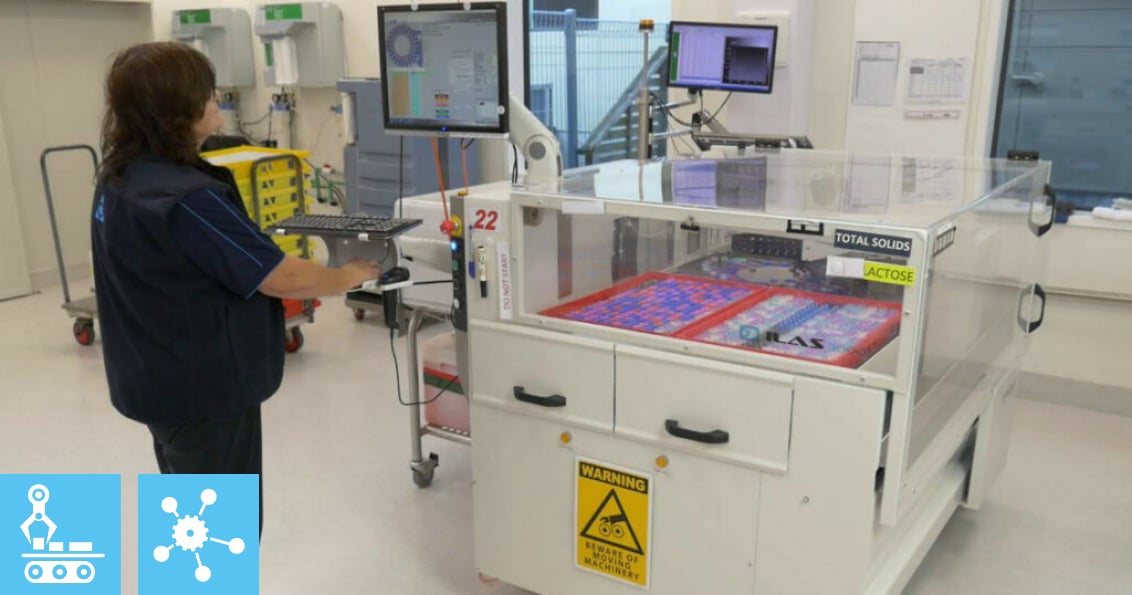 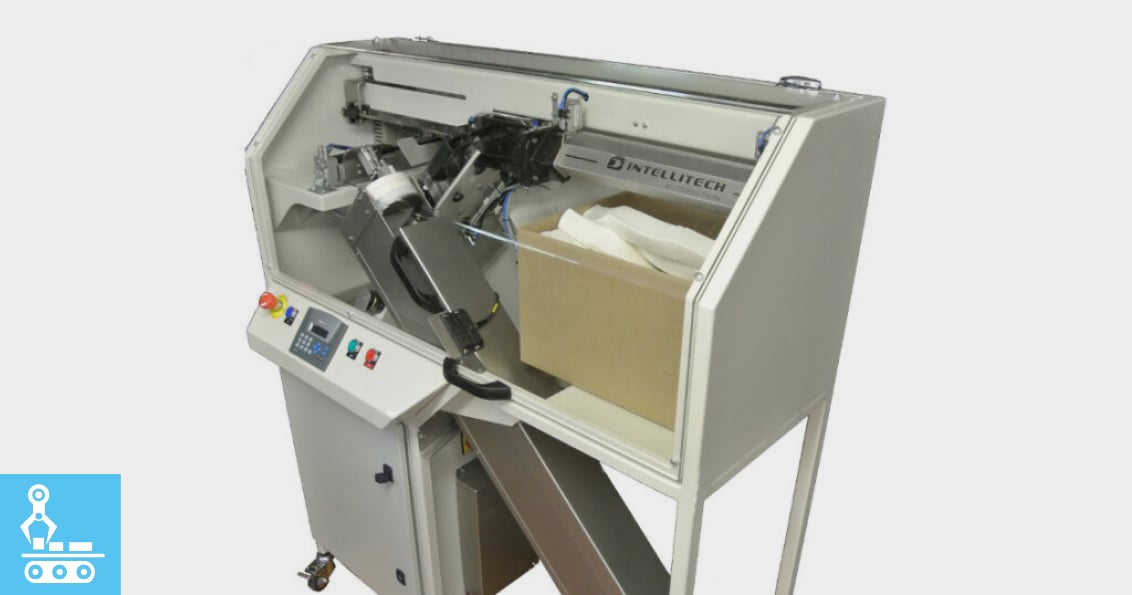 KPILaboratory AutomationLinuxMachine VisionMechanical AutomationSmartSoftware AutomationTraceability
Motion Design Ltd also uses persistent cookies to personalise the user experience, to help protect our customers and to provide us with research information. By clicking “Accept”, you consent to the use of ALL the cookies. Privacy Policy
ACCEPT
Manage consent

Cookies are small pieces of information that are stored in a browser-related file on your computer’s hard drive when you use our website. We use cookies to improve the customer experience. We may also use them to deliver information and fresh content specific to your interests. Cookies are widely used on most major Web sites.

You will need to either confirm or reject the use of cookies when you visit our website.
Necessary Always Enabled

Any cookies that may not be particularly necessary for the website to function and is used specifically to collect user personal data via analytics, ads, other embedded contents are termed as non-necessary cookies. It is mandatory to procure user consent prior to running these cookies on your website.